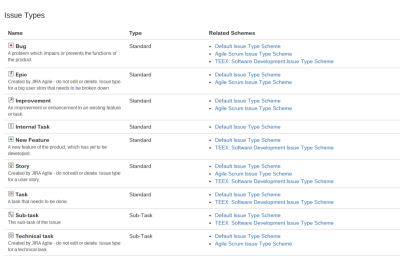 Each issue has a variety of associated information including:

Below is an example of system documentation that describes the use of a very complex system–a good list of what is possible within these categories in JIRA.

JIRA can be used to track many different types of issues. The currently defined issue types are listed below. In addition, you can add more in the administration section. An issue has a priority level which indicates its importance. The currently defined priorities are listed below. In addition, you can add more priority levels in the administration section.

Each issue has a status, which indicates the stage of the issue. In the default workflow, issues start as being Open, progressing to In Progress, Resolved and then Closed. Other workflows may have other status transitions. An issue can be resolved in many ways, only one of them being “Fixed”. The defined resolutions are listed below. You can add more in the administration section.